Flight from the Object: Donald Brook, Inhibodress and the Emergence of Post-Studio Art in Early 1970s Sydney

In the early 1970s, within the small art worlds of Melbourne and Sydney, the contributions of art theorist Donald Brook were as crucial to the innovation of Conceptual art as the art itself. He was an important, prescient but ultimately lonely participant in these developments, as were artists Peter Kennedy and Mike Parr, and alternative Sydney galleries Inhibodress and the University of Sydney workshop, Tin Sheds. Brook considered that national identity was irrelevant in art; was resolutely concerned with art but not at all concerned with “Australian art”. He was opposed to a methodology that excluded everything that did not fit into a preconceived and often teleological system, insisting that if a theory could not account for post-object art then the theory was flawed and not the art. While conceding that there may have been a basis for claims that postobject art was ‘simply not art’, he criticised conservatives for resisting post-object art, insisting that the issue was still to be argued. View/download pdf (730kb) » 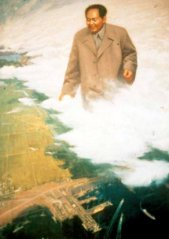 ‘Landscape’ was not devalued by the socialist realist oil painting of post-1949 China, but moved sideways as a subject and back into the picture plane as the framing site for heroic acts or transformative moments in the development of a socialist future. With the rise of the New Currents in Art movement of the 1980s, landscape was re-imagined as a site for a surrealist dreaming, whether counter-establishment or nationalist in intent. This 1980s and 1990s landscape painting, largely in oils, has survived both academic neglect and inattention from ostensibly more contemporary discourses, to obtain some recognition as a representation of the Chinese ‘folk’ or ‘national’ spirit. Landscape oil painting, despite sometimes being expressionistically naïve or technically less impressive than its painters might suppose, may respond to a need in its audience and a discursive demand for a modern cross-over between post-1949 and earlier imaginary landscapes in Chinese painting. The paper will be a tentative move towards a survey of the horizon of these issues chiefly by reference to the paintings and writings of Ding Fang (b.1956), and some notions from Warnke’s Political landscape, 1992. View/download pdf (2.47mb) »

Georges Bataille and the Limits of Modernism

Although Bataille’s writings, particularly his contributions to Documents (1929–31), are usually considered in opposition to the idealism implicit in conventional accounts of modernism, this paper discusses the degree to which his writings manifest tendencies characteristic of modernism—modernism in a terminal state, an endgame rather than historical development. In terms of artistic endeavour, Bataille’s critique of idealism focused on the process of transposition as an evasion of base material or psychological processes. However, if the scope of his writings is expanded beyond the limited period of Documents, then the process of transposition appears integral. Both Histoire de l’œil and Madame Edwarda: culminate in a scene of jouissance centred on the vision of female genitals, yet at this moment of unveiling, when corporeal reality threatens to lacerate the narrator’s consciousness, Bataille tarries the encounter through a transposition. This strategy qualifies Bataille’s critique of modernism: although he seeks to frustrate the process of transpositions he is unable to escape this process, and indeed relies on transpositions to render the process’s collapse. The image is the matrix of Bataille’s modernism, framing the movement between primordial limit-experience and transposition. It is a limit to be transgressed, an arena for an experience beyond language, and a veil over this experience. It is precisely this ambivalence that characterises Bataille’s modernism. View/download pdf (2.34mb) »

Jeff Wall describes his photograph Picture for Women (1979) as a ‘remake’ of Édouard Manet’s painting A Bar at the Folies-Bergère, (1882). The motif of the mirror reflection is fundamental to both artworks and foregrounds mutual concerns about spectatorship, the dynamics of the gaze and spatial relations. In each case, the mirror transforms pictorial space by reincorporating the off-frame zone, juxtaposing heterogeneous fields of vision and conflating multiple surfaces. Manet’s mirror is most famous for its ‘infidelity’ to that which it reflects, but the nature of its aberrations continues to confound critics. The controversy surrounding the mirror in A Bar at the Folies-Bergère lingers in the striking construction of Wall’s Picture for Women, which appears to be entirely composed of a mirror image. I argue that the idiosyncrasies of the mirror reflection in Manet’s painting find a new articulation, inspired by the cinematic, in Wall’s staged photograph. Using film theories of ‘suture’, I extend established interpretations of Picture for Women by suggesting that the ambiguous mirror in Wall’s photograph performs a suturing function and evokes cinema’s mobile frame. However, suture’s function is not absolute, nor final, just as the presence of the mirror in Wall’s photograph is assumed, but not certain. View/download pdf (831kb) »

The Man of Sorrows – an iconographic type of Jesus Christ following his Crucifixion – has received extensive analytical treatment in the art-historical literature. Following a model that draws scholarly attention to the dynamics of cross-cultural artistic exchange in the central Middle Ages, this article reconsiders recent advances in the scholarly literature and refocusses analysis upon the Man of Sorrows within the context of its ‘shared’ intercultural heritage, suspended between Byzantium and the West, as an image ultimately transformed from liturgical icon to iconographic device. View/download pdf (204kb) »

The Biennial as a Form of Contradiction: The 16th Biennale of Sydney, ‘Revolutions — Forms That Turn’

Large-scale international biennials of contemporary art continually present an excess of art and information within the realm of cultural tourism rather than art history. As a result, they resist scholarly analysis, particularly in terms of ‘form’. However, a kind of discourse has emerged around the ‘problems’ or ‘paradoxes’ of biennials, and common themes relating to opposing or contradictory forces have emerged. These themes provide the basis of a provisional framework of contradictions or ‘dialectics’ by which biennials can be analysed and discussed. This article presents four dialectical ‘themes’ in relation to The 16th Biennale of Sydney, ‘Revolutions – Forms That Turn’: modernity and postmodern critique; the paradox of ‘place’ as both local and global, being global while questioning ‘globalisation’; and the autonomy and politicality of art. The analysis provides insight into curator Carolyn Christov-Bakargiev’s dedication to ‘dialectical play’ within the 16 th Biennale of Sydney (described as the practice of exploring and heightening an individual’s experience of contradiction). Further, the potential for both curatorial work and biennials to provide unresolved ‘in-between’ spaces for inventiveness and new dialogue becomes more apparent. View/download pdf (1.18mb) »